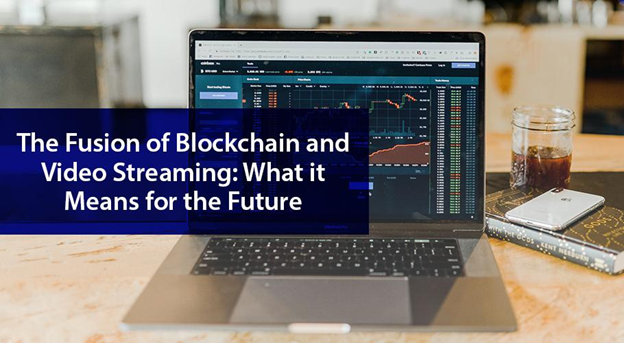 Over the Top (OTT) video streaming brought in an irrevocable change to the cable entertainment industry. Not only streaming platforms like Netflix, Amazon Prime, and Hulu possess an impressive library of original and licensed shows but other media companies are jumping the streaming bandwagon as well.

AT&T released its own streaming services such as AT&T TV Now, HBO network came up with HBO Max, Mediacom allows for streaming of all of its live TV and premium networks via its on the go app, and Comcast’s NBC released Peacock TV recently.

However, as the streaming video technology progresses, another player comes into the fold to disrupt this progression as innovative technology companies again jump a different bandwagon, and that is Blockchain for the video!

How blockchain will fuse with video streaming and chances of its quick-fire adoption remains to be seen though.

Blockchain on the Horizon

Amazon Web Service (AWS), Google Cloud, and Microsoft are top tech brands leading in video streaming and associated technology such as computing, networking, encoding, video storage, and streaming. As per a report by Synergy research group, Amazon is the dominant force in everything cloud with a share of 34%, followed by Microsoft with 11%, Google Cloud wit 8%, and IBM with 6%.

The enormity of AWS is evidenced by its lion’s share in Amazon’s profit, which is more than $10 billion in revenue annually. The giant wing caters to conglomerates and corporations like Netflix, Comcast, and PG&E as rent space to store colossal amounts of data on its cloud servers.

Contentos (COS) is a decentralized global content ecosystem that partnered with the decentralized video delivery protocol Theta Network, in order to integrate it with the COS.tv video platform so it could bring down the bandwidth cost of video deliver and improve the overall user experience. Many more startups have followed suit, and it wouldn’t be long when blockchain encompasses the entirety of the technological infrastructure for video streaming and video delivery occurs at less than half of the current price.

How Online Video Changed Everything

The infusion of video with the online world revolutionized how we view content today. According to Cisco, the video will consist of 82% of all internet traffic by 2021.

Instead of textual information across the web, we can express ourselves via multiple video formats through a multitude of platforms such as YouTube channels, Facebook Live, vlogs, Snapchat, and podcasts. So now instead of plain text and images in digital ads, we see animated GIFs. More and more people go Live on social media platforms, especially during the Covid-19 lockdown.

Netflix, Hulu, Amazon Prime Video, and HBO Now are among the few that have put video rentals, DVDs, and pure cable TV out of commission.

The ubiquity of affordable high-speed internet has aided the rapid adoption of video formats. Most American households turn to providers like Mediacom as they have introduced fiber-level internet speeds at the economical price of cable, and call Mediacom customer service to get internet for both inside and outside their homes in order to stream videos and even live TV on the go without any lag.

Video still continues to change everything and will have a corollary impact on technologies. Therefore, expect evolving improvements in video streaming and storing methods.

The Blockchain is Here

A decade ago, Blockchain with its transparency, reliability, and decentralized nature overturned many established technologies and its industry leaders. Its spearheading application through cryptocurrency particularly proved an ideal method in securing virtual and intellectual assets.

It’s been a decade and experts believe that we have barely scratched the surface of its potentiality. Blockchain is a peer-to-peer network encompassing computers across the globe with no centralized authority. Digital information is stored on a public database, but for its security and authentication, the information is duplicated and distributed across the network of computer systems on the blockchain. The entire process is irreversible and impossible to cheat with and eliminates the need for a middle-man. It is particularly a boon for video streaming platforms as it eliminates the need for cloud storage rentals.

CNET Founder, Halsey Minor, makes use of underutilized computing energy and blockchain tech to bring down video broadcasting costs. He says there is an overabundance of data processing avenues with 20 million computers and servers, out of which 20% aren’t used at all and 30% remain unused most of the time.

The fusion of Blockchain and Video Streaming: The Consequences

Video streaming platforms like Netflix, keep increasing their monthly subscription fee much to the annoyance of their subscribers. To avoid this, streaming platforms need to offset the ever-increasing cost of humongous video content stored on the rented servers of the select few dominating corporations.

The application of blockchain technology will reduce the huge cost of video storage for video platforms and boost their revenue. It can also be accompanied by Smart Contracts technology that will enable storage and transfer of video content through inordinately secure and encrypted methods. More startups have their basis in blockchain technology to enable faster processing of video-streaming transactions, and lastly, the Miners, who rent out their computer space, will be the replacement of these huge companies at a lesser price in the form of cryptocurrency.

A glimpse of the future

Baldwin Jackson is a successful digital marketer with expertise in search engine optimization and content marketing. The perfect balance of his analytical ability and creative thinking is what sets him apart from other practitioners in the digital marketing realm. He has helped a lot of small and medium-sized businesses in crafting their digital marketing strategies that are not only cost-effective but delivers results as well.

Baldwin is also a proud father of two kids and a Sports enthusiast. When he is not working, you will find him watching ESPN and NFL network. He has been able to get an amazing package on his favorite channels from Buytvinternetphone.com.

Do You Have Your ‘Go-To’ Appliances Repair Company?

Preparing Your Plant for Frequent Operations

What It Management is all about

The Actual Idea Of Cloud-computing